The Industralization has begun!
WIND my ROOF has called on SEGULA Technologies and its subsidiary SIMRA to industrialise and assemble the first eight WindBox wind-solar modules, which will be released in February 2022. The aim is a long-term collaboration with the French engineering giant. 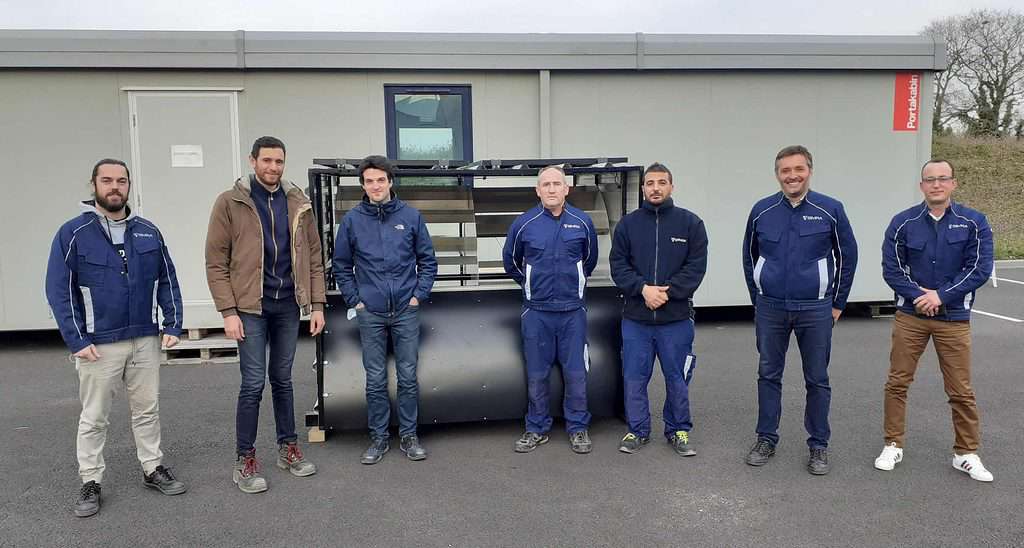 SEGULA Technologies is a global group and one of the French leaders in the field of engineering. Active in several industrial fields, they offer their expertise to innovative start-up companies via a support programme called HeXplora, of which WIND my ROOF is now part.

In our open innovation approach, we are keen to support companies and start-ups that offer effective solutions to accelerate the energy transition. We were very quickly excited by the WIND my ROOF project, which stood out for its simplicity and maturity.

Nicolas Fraisse, Technical Director of SIMRA, in charge of the partnership

Behind the scenes of the assembly of a building wind turbine

Segula Technologies has thus supported WIND my ROOF in the production of its first eight rooftop wind turbines. SIMRA’s teams are in charge of their assembly.

In a dedicated area of the Saint-Nazaire workshop, two fitter-fitter technicians follow the detailed assembly instructions for the WindBox. Initially assembled in ten hours, rationalisation efforts have reduced the assembly time to eight hours per module, or one WindBox per day. Another area is dedicated to the production of the concrete studs, which are used to hold the WindBoxes on the roofs according to the project.

For Yanis, Technical Director and co-founder, and Quentin, mechanical engineer at WIND my ROOF, this is another step in the startup’s development.

We are ready to receive large orders, as the turbines can be assembled quickly and can leave the site directly. The team is very well organised and it's great to work with the SIMRA team.

This first series is part of an industrialisation process with the Segula Technologies group. An assembly series of 100 modules is already being prepared in order to carry out future WIND my ROOF projects.

WIND my ROOF
WIND my ROOF is a start-up working on the deployment of renewable energies on buildings. The company offers a roof-top wind turbine combined with solar panels: the WindBox. Installed on the roof terraces of buildings, this wind-solar module contributes to their energy autonomy.
Accéder au site web
SEGULA Technologies
SEGULA Technologies is a global engineering group, serving the competitiveness of all major industrial sectors: automotive, aeronautics, energy, rail, naval, life sciences and telecommunications. With a presence in more than 30 countries and 140 offices worldwide, the Group favors close relationships with its clients thanks to the skills of its 10,000 employees. As a leading engineering firm that places innovation at the heart of its strategy, SEGULA Technologies carries out large-scale projects, from research to industrialization and production.
Accéder au site web
SIMRA
SIMRA is an engineering, service and production company, a subsidiary of the SEGULA Technologies group, dedicated to aerospace activities. Its activities include the aircraft design phase (architecture, propulsion systems, definition of sub-assemblies, etc.) and the manufacturing and integration phase of complete sub-assemblies.
Accéder au site web
Previous
Next

We'll be happy to exchange with you!
Click here!
Linkedin Twitter Youtube
NextWind tunnel tests of the WindBox: WIND my ROOF validates its technology at CSTB in NantesNext
We use cookies on our website to give you the most relevant experience by remembering your preferences and repeat visits. By clicking “Accept”, you consent to the use of ALL the cookies. However you may visit Cookie Settings to provide a controlled consent.
Cookie settingsACCEPT
Manage consent

This website uses cookies to enhance your experience when browsing the site. Of these, cookies that are categorized as necessary are stored on your browser because they are essential for the basic functionality of the website. We also use third-party cookies that help us analyze and understand how you use this website. These cookies will only be stored in your browser with your consent. You also have the ability to decline these cookies. But disabling some of these cookies may affect your browsing experience.
Save & Accept
Powered by